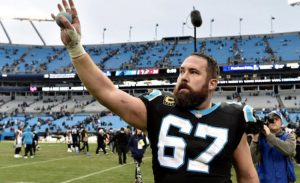 Center Ryan Kalil announced his retirement in 2018, prompting general manager, Marty Hurney, to find his long term replacement. Hurney signed top free agent center, Matt Paradis, to a three year deal. In a stunning development, Kalil signed with the New York Jets on a one year deal Thursday afternoon. The Jets’ twitter account announced the signing. Kalil reversed his retirement papers and decided that $8.4 million was enough to come back into the league. The question is, why is there so much hate?

In 12 seasons, Kalil gave his all for the Panthers organization, and quite frankly it’s shocking to see so many people talk bad about him on social media. He is a five time Pro Bowl player and two time First-Team All Pro. He poured his heart out and left everything on the field for so long in Carolina. It’s not like Carolina needed him now. The Panthers wouldn’t have paid Kalil that much money to come back. Carolina has already invested a lot of money in Matt Paradis, who is a really good player in his own right. It’s puzzling why fans are throwing shade at a man who decided to provide for his family for one last season.

2018 was Kalil’s last season, but money talks. According to reports, conversations between Kalil and the Jets have been going on for a month. Finally, Adam Gase convinced Ryan to come out of retirement to block for Sam Darnold, who went to Kalil’s Alma Mater, USC. After long negotiations, Kalil had 8.4 million reasons to come out of retirement. Panthers fans shouldn’t blame the guy. If a team is willing to throw that much money at you, I’m sure anyone would take it. It’s not like Kalil requested a trade. It’s time to give Kalil a break. No man would turn down that money. Both Carolina and Kalil are better off. Carolina gets a young star center for three years and Kalil is going to make bank elsewhere. Kalil staying in Carolina on a one year loan wouldn’t have helped the team. Had Carolina paid him to stay, they’d be without a top center next season.

The signing also prompted other prominent media members to call Kalil out. One person tweeted “I’d take $8.4 million for a half season too”, which was an obvious dig at Kalil’s injury history prior to last season. Is Panther Nation not better than this? It’s not like Kalil ever talked trash about the Panthers and remained salty for years (like a certain former Panthers running back). He never had any off the field issues. He didn’t have domestic violence issues, like some players. He never got into an altercation with coaches or teammates. He didn’t go to a division rival. He didn’t even go to a team that Carolina plays this year. So I ask again….Why the hate? For 12 years, he literally gave his blood, sweat and tears for Carolina. Let’s get rid of the negativity and be happy for Ryan. As a former Panther who demands respect, he’s earned it.

To go along with this positive message, I’m going to help you get to know Ryan on a more personal level. Here are a few little known facts about him:

Kalil is of Lebanese and Mexican descent.

He comes from a football pedigree, as his father played for the Buffalo Bills (drafted in 1982) and had a short stint in the USFL.

His wife, Natalie, is a former cheerleader for USC.

Ryan and Natalie have two daughters.

Kalil has been interested in the film industry since he was a child. He made several claymation films during his childhood.

Kalil and fellow USC Alumnus, Will Ferrell, made a football training spoof for the NFL Network.

For Ryan, this is a new chapter. As fans, we tend to get caught up in our teams. Sometimes, we should think about the player and look at things through their eyes. Let’s be happy for the guy. He was the cornerstone of Carolina’s offensive line for 12 years. Being able to make that much money and provide for your family for one more year is a blessing. People are allowed a change of heart. I’m not telling Panther Nation what to do, but I’m choosing to wish Kalil the best. He deserves happiness, as we all do….and he has more than 8.4 million reasons to be happy. #KeepPounding