Training camp starts tomorrow and there’s plenty of excitement surrounding the Panthers. Fans have just watched the team on Amazon Prime’s “All or Nothing” and saw an in-depth look into Carolina’s 2018 season. There’s a lot to be excited about. On paper, this team looks like a contender. They need to take it game by game, but the ultimate goal is to make the playoffs to have a chance at a Super Bowl. However, in the NFL, it’s rare that things go as planned. Here are five reasons that Carolina won’t make the playoffs: 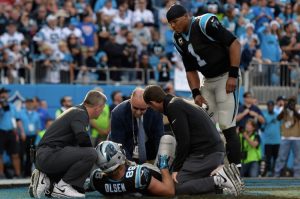 Over the last couple of years, the injury bug has hit the Panthers pretty hard. If, God forbid, it continues to bite Carolina and no one steps up, it’s going to be a long season. Especially if Cam Newton gets hurt again. This season almost solely depends on Cam’s health. Cam’s health might also depend on the health of his offensive line, as we saw last season. Hopefully, the injuries will be kept to a minimum.

Carolina will be traveling 22,008 miles for away games this season, which is enough for eighth most in the league. By comparison, last season Carolina only traveled a little over 6,000 miles all season, which was the least amount in the league. Traveling long distances takes a toll on teams, but it’s a part of the game. The good news is, 8,000 of those miles are to and from London. Take those 8,000 miles away, and they only travel 14,008 miles this season, which would’ve been good enough for 20th. More good news: Carolina’s bye week comes right after the London trip, so they’ll have time to rest. With any luck, this won’t hurt the team too much.

Week 10 starts a rough stretch for Carolina. In that eight game stretch, they play the Packers, Redskins, Colts, Seahawks, Falcons twice and Saints twice. Carolina has the ability to beat any of those teams, but this is still a tough stretch. The Packers aren’t the same team as in year’s past, but they still have Aaron Rodgers. Seahawks still have Russell Wilson. Colts played well last season in Andrew Luck’s return. With the Falcons and the Saints, division games are always tough. Especially against these two teams. The hope, as always, is that Carolina gets a fast start in the season and gains momentum heading into the second half of the season.

If Carolina wants to make the playoffs, they need to limit their mistakes. Prior to Cam’s injury, it appeared that he had a handle on Norv Turner’s efficient offense. He only had 4 interceptions before the Pittsburgh game, where he hurt his shoulder. A healthy Cam who can stay efficient would be a huge plus. The offense as a whole needs to limit the turnovers. The defense needs to be in position to make plays and cause turnovers. If this doesn’t happen, it will be long season.

Sometimes, teams just don’t have the chemistry that they had the previous year. New players come in via draft and free agency and sometimes their personalities don’t mesh well with the core. There isn’t any information that has been given to say this is happening, but it could.

This article isn’t designed to be disrespectful to Carolina, but quite the opposite. They will make the playoffs as long as none of these things happen. Here’s to hoping that nothing keeps them from achieving their dream of a Lombardi Trophy.