There’s been a lot of discussions on whether or not the Panthers would re-sign their All Pro Right Tackle Daryl Williams. As of now, all signs point to Carolina letting Williams walk. I know this won’t sit well with a portion of our readers, but I’m here to make you feel at ease about it. Or, at least, I’m going to try.

I’ll start with some info that most fans care about. If Carolina let’s Williams walk, Daryl will be the top Offensive Lineman on the free agency market. All-Pro Right Tackles don’t often become available, so he will command big money. That will only help Carolina’s comp pick status. According to my source, who is the compensatory pick expert with Over The Cap, if Williams signs a contract with an average salary of between 8-9.9 million dollars per year, Carolina will net a fourth round comp pick. If he signs a contract worth an average of 10 million dollars or more, we will net a third round comp pick. Obviously, there are other variables such as playing time with a new team and additions of free agents. Daryl could sign a contract that will average more than $10 million, so a third round comp pick is what we’d get as long as we don’t sign a player that is equal to Daryl’s stature. 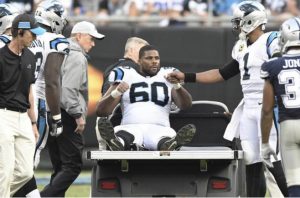 On July 28, 2018 during training camp, Williams was carted off the field after injuring his knee. It was later learned that he tore his Medial Collateral Ligament (MCL) and dislocated his right knee cap. He was ready for week 1 against the Cowboys, where he started, but re-injured his knee in the 4th Quarter. On September 12, Daryl was placed on Injured Reserve.

Now, this doesn’t mean he’s injury prone. It just means we don’t know how his injury will affect his knee going forward. We can’t afford to pay a guy top free agent money and not know how healthy he will be. After all, we paid Matt Kalil too much money during free agency. Now look at where we are. I digress. In my humble opinion, we have too many holes on the roster to spend that much money on a player with possible injury concerns. A lower body injury for an offensive lineman could be disastrous.

As we all know, Taylor Moton filled in quite nicely at Right Tackle for the Panthers in 2018. In fact, he actually played better than Williams during his All-Pro season.

In 2018, Moton started 15 games at RT and allowed 29 QB pressures. Conversely, Williams allowed 39 QB pressures in 16 starts at RT in 2017, which was his All-Pro year. Wait, there’s more! During Williams’ All-Pro year, he needed help blocking from the Tight Ends on 19.7% of his snaps. That was 7th worst in the NFL among Offensive Tackles. In 2018, Moton rarely needed the Tight Ends for help. I’d hate to move Moton from RT after finding this information. 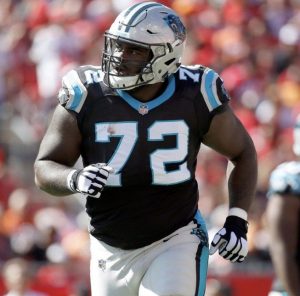 The Panthers have around $15.6 million of cap space as of now. With so many holes on this roster and only 7 draft picks, we can’t afford to pay Daryl top money. Yes, we could cut some players to gain more space, but that would create more holes and it wouldn’t save much. Backloading a contract would only cause cap issues next year and beyond. I just don’t think it makes financial sense to pay Daryl the money he will command when we have so many vacancies on the roster.

This year’s NFL Draft is loaded with a lot of good Offensive Linemen talent. I believe Carolina will likely go Defensive End in the first round, but we will definitely come out of the top three rounds with at least one Offensive Lineman. If Carolina does go OL in round one, we could have a choice between Cody Ford, Jonah Williams, Greg Little, Andre Dillard and Jawaan Taylor. If we opt to go OL on day two, like I believe we will, we could get Tytus Howard, Yodny Cajuste, Dalton Risner, David Edwards or Isaiah Prince. Why pay Williams top dollar when we can get a rookie for cheaper?

I believe Carolina will let Kalil start at Left Tackle (unless he’s released) while grooming our rookie, whoever that may be. Hopefully, this article will ease your minds if we don’t re-sign Daryl Williams. All in all, I trust Marty Hurney. If we do re-sign Williams, it’ll be as a swing tackle, at best.